So obviously as it’s Christmas Trading Places has been on the TV a lot. And obviously, even though I know the script off by heart, I still watch it.

What's in this guide? show
So obviously as it’s Christmas Trading Places has been on the TV a lot. And obviously, even though I know the script off by heart, I still watch it.
So why did they owe $394 million dollars?
Why is it relevant today?
You may also be interested in:

Firstly it’s one of the greatest films ever made with a top class ensemble cast, John Landis at the helm with a fantastic score.

But also, because I love the subject matter. I’ve worked in finance my entire life and in fact, my first proper job was as a clerk on the NYMEX crude oil trading floor in New York, just below the COMEX trading floor.

And just so you know, it really is that crazy, when I first arrived the sound felt louder than a football stadium.  It was absolute chaos but as the days and weeks went on the nuances of day trading, the signals, the relationships, the terminology and the scribbles on cards all made sense. It also really is completely silent pre-session until the bell goes and all the trader kicks off.

Finance is a fascinating subject matter for TV and film because it is so complex, so much money is at stake and it can make or break not only the protagonist but also the peripheral characters in either acts of greed or as innocent bystanders just read The Big Short: Inside the Doomsday Machine, the book is so much more explanatory than the film and gives some good insight into how the markets work.

I was forwarded this pretty decent explanation of how Valentine and Winthorpe made their money trading OJ futures here What Actually Happens At The End Of ‘Trading Places’? but it doesn’t quite cover how the Dukes lose theirs.

I won’t go into plot holes such as even if you are a desk-bound head of commodities broking you can’t just rock up and start trading on the floor. You need a membership and mnemonic like “VAL” or “WIN” which cost a fortune (they were the memberships that put up for sale in the margin call scene). Also if the market moved from $1.42 to 30 cents then it would be halted “limit down” so everyone could chill out a bit. Even though it is a pretty erratic contract – see the price movements since the 1970s in this chart courtesy of Investors Intelligence. 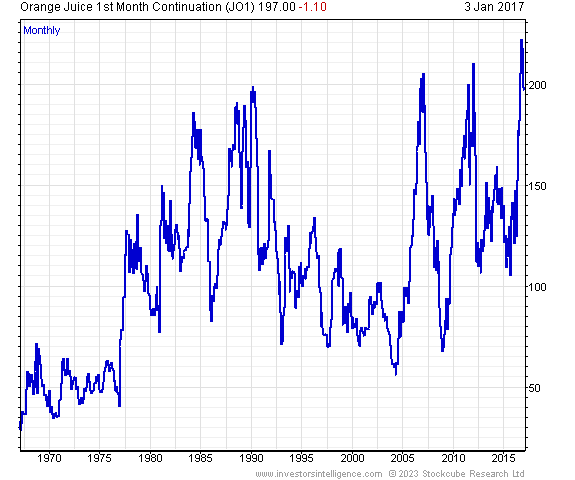 So clearly WIN and VAL knew that the crop report was good so the price there would be enough supply for the OJ demand and sold (went short) when the price was high as the Dukes thought it would be bad and were, therefore, buying as supply would be low pushing the price up.

It all ended for them when the phrase “margin call gentlemen” was uttered because the Dukes were buying OJ futures and were long the market.

They had bought OJ through their trader Wilson and when they instructed him to sell he passed out and couldn’t close the open positions.

So they were left with a big long position overnight.  When have an open position intraday or overnight you have to lodge margin (otherwise known as a small deposit) with the exchange which is usually between 2% and 15% of the total contract value.

So why did they owe $394 million dollars?

Today, if you want to open 1 futures contract of OJ the deposit costs is $1,950 in margin. This is what the exchanges deem to be an appropriate amount of price movement to cover potential profit/loss.

Initial margin is the deposit you have to put down for buying 1 contract and variation margin is the amount that is either added or subtracted from your account at the end of the day based on your positions profit or loss.

However, they are futures contracts which means if you sell them before the contract expires in either January, March, May, July, September, November before the fifth business day prior to the last business day of the contract month then you don’t take delivery you just bank the profit or take the loss.

So assuming the Dukes bought 101,025 contracts of OJ all the way up to $1.42 per contract the average price may have been on the high side. Let’s assume that Wilson failed to sell any of them because he passed out with an average buy price of $1.275

Using this inflation calculator $394 million would be about $954,000,000 today. Most firms don’t have that sort of cash as operational funds, unless they start raiding client accounts to cover their own margin calls.

Why is it relevant today?

Firms can’t raid client accounts now, as client funds must be segregated from the firm’s funds for that very reason. But even back in 1983 when the film was made if Duke and Duke wanted to, most client funds would have been lodged with the exchange for margin purposes (as Duke and Duke was a commodities broker not OTC) so there probably would not have been enough funds in client accounts to cover the deficit anyway.

A modern example of this is what happened to MF Global (incidentally, it was known as Man Financial when I worked for them on the NYMEX floor, then MF Global where I was a derivatives broker in London until they went bust in 2011 causing the loss of over 3,000 jobs.  The story goes that allegedly the CEO circumvented risk parameters and put on bets that were too big. There was not enough of the firm’s money to cover the position margin and funds were moved intraday from client accounts to cover the loss. You can read more on this in The Money Noose: Jon Corzine and the Collapse of MF Global

Prior to this one trader at MF Global lost $141 million trading wheat with virtually no money in his account. It was a classic case over trading to try and recoup losses with money that you didn’t have. Much like how Nick Leeson brought down Barings Bank.

There was also once an incident when a trader on the floor either trapped his keyboard in a draw or threw it at another trader on the exchange floor (it’s not quite clear which) and bought up the entire days futures limits in a commodity resulting in multi-million-dollar losses.

As the commodities markets become more accessible through online brokers you don’t need to lodge money on exchange to trade orange juice. You can just open an account with a spread betting or CFD broker that offer FCOJ trading and start trading on leverage in about 15 minutes with no experience.

The problem is that just like the Dukes even beginners can bet with money they don’t have.  The first instance of this becoming a major problem was when the CHF cap was removed and sent the currency down about 20%.  This cost people big time as positions were leveraged up to 500 times. Which means if you had £1,000 in your account you could bet on 500,000 worth or currency. If that currency moves 20% that is a loss of £100,000, one example was a teacher on £18k per year losing £280,000.

The FCA has recently stated that it plans to stop excess leverage for spread betting and CFDs which sent shockwaves through the industry. IG and CMC lost about 35% of their market cap because leverage means that clients can do more business. The broker is essentially lending the customer money to trade.

In some respects, it’s a good thing, as inexperienced traders shouldn’t have access to that sort of risks, but there are other options such as putting in place a no negative equity guarantee.  This basically means that if you bet big, the broker guarantees that you will never lose more than the balance of your account.

It puts the risk on the brokers to put in place more effective risk measures and ensure that positions are closed effective and quickly with reduced slippage.

Having said that, the new rules won’t apply to institutional accounts or professional traders like the Dukes would have be stuffed anyway…

FYI, I originally wrote this on the Huffington Post last year but there are loads of grammatical and spelling mistakes in it I wanted to repost it here and clean up. 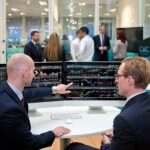