Ann Hunt, CEO of Chasing Returns explains how post-trade analytics can make you a better trader? 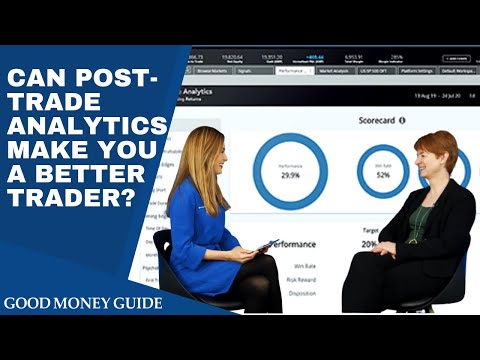 What does performance analytics do?

Performance analytics is a suite of products to help people trade better. It focuses on, three key things. The first is we take away the pain of homework, so, it’s a platform where your trades are logged, your journal is there, your scorecard is available every day, your long-term results are available to look for trends. And then we have modules that look at trading psychology. So, as much as it’s really good to understand which product does better and which time of day might suit your trading, the stuff that’s really actionable for traders is when they get emotional. We’re able to measure when, for example, if you start trading very quickly and it affects your performance, we’re able to show you that. Or if you’re overexposed or if volatility’s high, et cetera, et cetera, okay?

We have a series of heuristics that we measure for each individual trader, and we show them whether for them it’s a strength or a weakness and that way, traders can take real action. They know the problem, we’re able to alert when it’s happening, and they’re more likely to do something about it.

That’s the psychological part of the platform. And then the third part of the platform, which is called playmaker allows traders to set up their own plans. We all know we should have a plan, and most people write it on a piece of paper, but we actually have it embedded in their trading platform. And so, we can tell them in real time if they’re green, which means they’re sticking to their plan. If they’re amber, which means they’re at risk, or if they’re red, which is you are now trading with a lack of discipline. And what we’ve shown over time is that when traders are disciplined, many, many traders who are not profitable are actually profitable on their discipline traits. So, the idea is to help people understand that they can be profitable if they’re better at sticking to their plan.

What do you think are the major mistakes that most traders make?

I think mistakes is a hard one, I think it’s around emotions. I think people go into every trading session with the best of intentions and typically, it’s your emotions that drag you off track. And so, what people need to do is need to build habits into their day to help them stay on track, which is why we’re attempting to be inside the trading platform, helping them to recover quickly from mistakes.

We work a lot with sports people, we work with Saracens within Stonex for example. If you talk to any rugby player and we talk to the team a lot, they would never say, “We don’t make mistakes.” Even professionals make mistakes all the time but what we want people to do is recover faster. So, acknowledge that you’ve made a mistake and don’t let it drag you down a path and just get yourself back on track.

How can Performance Analytics help solve this?

It solves it in a number of ways. The first and most important thing is it gives you awareness. I used to work for JP Morgan on the trading floor, on Wall Street. There was a joke that you’d look around the trading floor and everybody would know who was going to blow up their account apart from the guy himself, and it’s typically a guy. When you’re stuck in an emotional state, you’re the last one to know you’re in it. It’s very hard trading alone to get yourself out of that. What Performance Analytics does, it’s like your coach, it’s sitting beside you, and so you just get a little ding, amber, right? You get a warning, so, it pulls you out of it, right? And it’s up to you to get yourself out, it’s not magic potent, but it gives you that trigger for you to then set in motion your checklist to try and get yourself back on

What do you think makes a successful trader?

I think the biggest thing about successful traders is their lack of conviction. Traders who are overconfident tend to let the bad positions run. So, people who are more open to questioning themselves and understanding that positions can change and are flexible in their opinions, I think do better. I think that’s the number one characteristic. Rob Brockington, CEO of Claro Money on the importance of financial guidance Charlie White-Thomson, UK CEO of Saxo Markets on what’s in store for the next 30 years